Hospice has a new home in Swindon Town Center 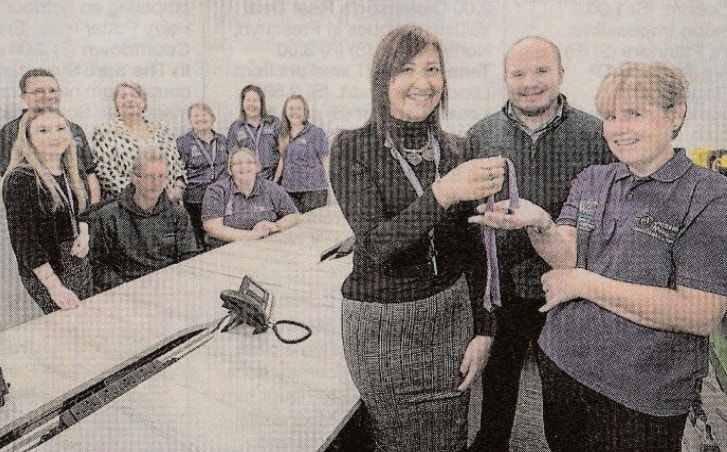 Firms steps in with offer of local office

A CHILDREN’S hospice charity moved into its new offices in the heart of Swindon town centre on Wednesday.

Jessie May was given a free office in Tricentre 3 after Mayor Maureen Penny suggested that Fig Offices could not support its cause.

The new offices will give the Bristol based charity a Swindon hub, which will make it easier for its nurses to help people in the town and work with local businesses to raise awareness and much-needed funds for its work.

Mayor Penny said: “Its a really special day, to have them with a Swindon address and phone number is great.

” This is one of my choosen charities so when I asked Fig Offices if they had any charities the wanted to support and suggested Jessie May.
Denniss Removals moves Jessie May Trust

“Debbie has worked very hard to get the contact together, I’m so proud of the team.”

Debbie Clarke, Jessie May Trust’s community fundraising officer for Swindon and ?Wiltshire, was delighted with the new home. She said: “It’s the start of many good things, it has a great networking space and room and services have been provided for free so all the money we get will go towards the charity.”

Jess May team leader Jo Conroy said: “It’s lovely to have a purpose-built office, it will hopefully give us a bigger prifile in Swindon.

“Everyone has been really welcoming and friendly and it’s great to be in the centre of town.

“We have a brilliant team and we’re here to make a difference for young people and their families.”

Kristina Granat, Fig’s Swindon centre manager, said: “When we opened for business this autumn we wanted to do something tangible for a deserving local charity and found that the Jessie May Trust needed some central office space.

“We had heard of their reputation as a much-loved children’s hospice at Home and thought we could donate a new home for them to operate from, helping them to concentrate on their fundraising activities.

“We are all really delighted to welcome them as the first of many new occupiers at our Fig Swindon center and to provide complimentary serviced office space.”

Debbie added: “We cannot thak Kristina and her team enough for their help and support throughout.

“To be in the heart of Swindon makes a huge differnce to us and the ability to really be part of the town’s business and professional commity.”

Dennis’s Removals and Storage offered their services free of charge to the Charity and helped it to move in..

Designed for companies that need a first-class service, our relocation packages provide just what you need! With simple procedures and less administration. It’s a service designed to remove relocation stress for executives and key personnel undergoing moves anywhere, in the UK or abroad.

What our customers say about us!

Firstly a huge thank you to your brilliant friendly jolly team who moved us on Thursday and Friday last week. It was such a stress free move and your men were so brilliant, willing and accommodating!! So thank you again
Amazing service and a great price!! With only 2 days notice, these guys managed to organise the removal and storage of all my stuff from a three bed house. A real family firm. So glad I stumbled across you. Thanks once again for all your care, and your hassle free business.
I had an absolutely seamless removal service from Dennis removals. They stepped in after another company let me down with just 4 days notice. Right from the speedy to quote to the packing my house within 24 hours – every single member pulled out all the stops to make this as stress free as possible and I cant recommend them enough.
I used Dennis’s last month and I was so happy with the service, from quote to removal everything was explain and all questions resolved quickly. The move was split over two days, both days the guys were on time even through the snow, they made the whole process really easy with no stress. If I was going to move again I would definitely use them and highly recommend the service.
Helped my sister to move house from Chippenham to Cliffe Pypard and can’t praise these lads highly enough. Patient, helpful – nothing was too much trouble. If you want a removal service, these are second to none. Highly recommend.
Firstly can I say a huge thank you to you and your team for moving me from Swindon to Bristol. It was very short notice and your team pulled out all the stops to make for a seamless, friendly and professional move. Nothing was too much trouble. Also your guys mentioned that you will recycle the box's and if i let you know that they could be collected when you are in the area you would collect them.

Contact us for a Free survey and a no obligation quote.

If you want a company you can trust, get in touch, we will handle the entire process, leaving you with a stress free experience.